San Francisco and Portland constantly top lists of cities in the United States with the best coffee, but Seattle typically ranks number one. In a September 2022 article for Bankrate, Meaghan Hunt dubbed Seattle “our nation’s coffee capitol.” Hunt wrote that there’s something for everyone in Seattle, whether you're heading to "historic Pike Place Market or scouting an underground latte art competition.” Of course, Seattle is home to giants like Starbucks and family-owned shops like Moore Coffee Shop. However, there’s another city in the Puget Sound with incredible coffee offerings that rival those in Seattle, San Francisco and Portland. The Snohomish County city of Everett provides coffee lovers with everything from excellent espresso to vegan macha lattes. The best coffee in Everett can be found in drive-throughs and donut shops as well as traditional cafés. From Narrative Coffee to Choux Choux Bakery, follow below for five of the best coffee shops in Everett WA. 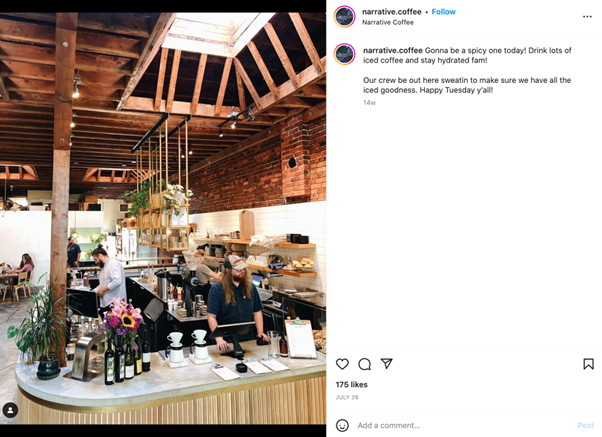 First on our list of the best coffee shops in Everett WA is Narrative Coffee, which can be found in a century-old historic building. Revered for their artisanal blends and their shop's cozy atmosphere, Narrative Coffee is a favorite of both locals and visitors to Everett.

The light-filled space is perfect for regulars who care to stick around and read a book while drinking their classic cup of Joe. At the same time, their seasonal menu entices new patrons. According to their website, Narrative Coffee is a "community focused, quality forward coffee company and from-scratch kitchen."

Narrative Coffee is well-known in Everett, Seattle and beyond the Puget Sound region of Washington State. It is so popular that the owners recently opened a second spot in Bellingham -- about an hour north of their flagship restaurant.

Enjoy fabulous eats like their biscuit and lox, sunchoke soup and Count of Montebisco sandwich. The latter boasts ham, Gruyère, cranberry compote and maple syrup -- ideal for the holiday season! You can follow their Instagram here for more seasonal eats and beverages. 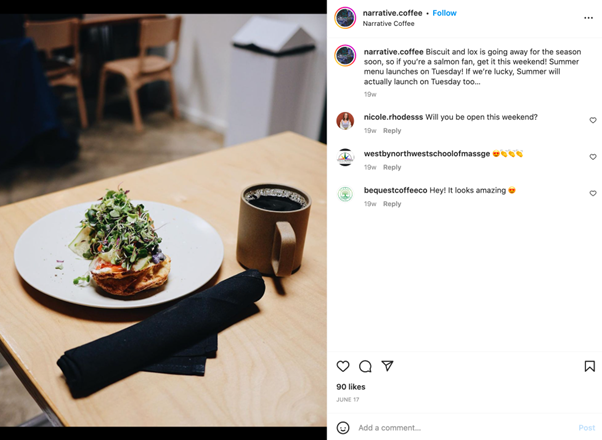 In an interview with Narrative Coffee's Maxwell Mooney for Seattle North Country, Richard Porter praises the Everett café. Porter points to Narrative Coffee's many well-deserved awards. He notes that Narrative actually earned "'Best Café in the World' from coffee media leader Sprudge.com" in 2017.

But what do everyday coffee drinkers think of Narrative? Tripadvisor reviewers describe the coffee at Narrative as "made with a real handcrafting style and tastes great." As their Instagram feed attests, "the preparation is actually an artistic process to observe." 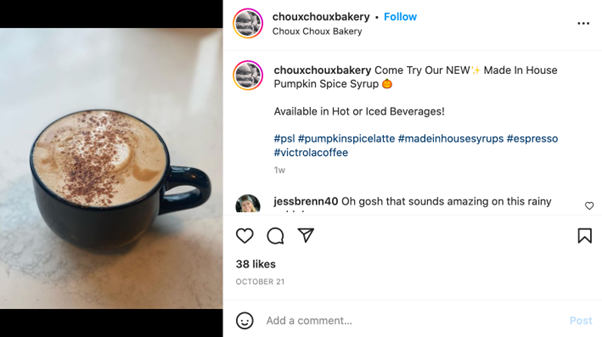 Next on our list of the best Snohomish coffee shops is Choux Choux Bakery. While Choux Choux is technically a bakery and not a coffee shop, patrons consistently rave about the lattes and other beverages served there.

Founded by Rachel Schreffler back in 2016, this small-batch bakery is beloved by locals. In addition to incredible lattes made with beans from Victrola Coffee Roasters, Choux Choux also offers a variety of sweet and savory pastries. These include everything from pizzas and hand pies to macarons and pumpkin olive oil mini bundt cakes. 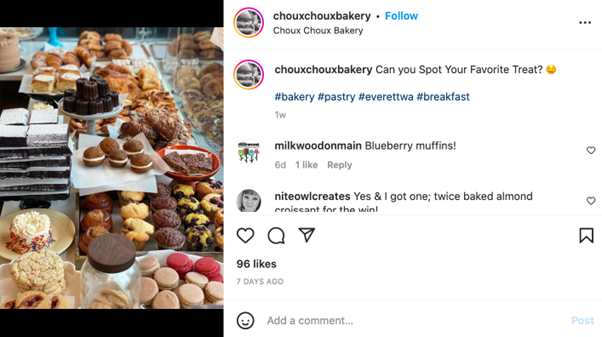 Curious what patrons have to say about Choux Choux Bakery? Yelp reviewers like Betty D. describe Choux Choux as "a favorite place for wonderful coffee, hand made pastries and a place to meet friends." Paired with a hot drip coffee or delicious latte, reviewers love the hazelnut croissants and savory bread pudding.

Interested in a mid-day meal and second jolt of caffeine? Tripadvisor reviewer Sarah O. says Choux Choux has "great coffee and the soups and sandwiches are good for lunch." Google reviewer Eric extols the coffee as "fantastic" and the pastries as "delicious." Choux Choux is clearly a must-try for many. 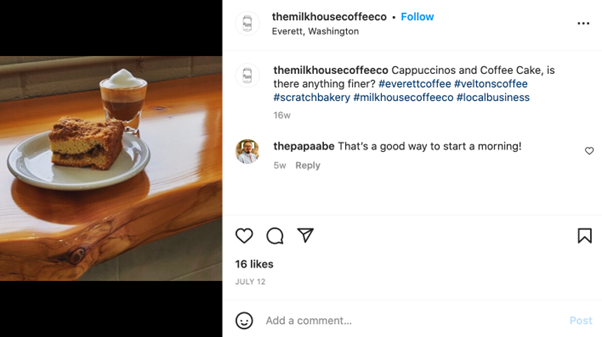 The new shop took the place of Walt's Milk House, which was a local destination for many Snohomish families. Interestingly, Heather and Michael Wallace brought their new space to life with help from the team at Narrative Coffee.

In "Grab a latte with a side of history at The Milk House" for KING 5, Kim Holcomb notes the community completely embraced them. Quoting Michael Wallace, Holcomb writes that "'it takes a community and that's what we have.'" 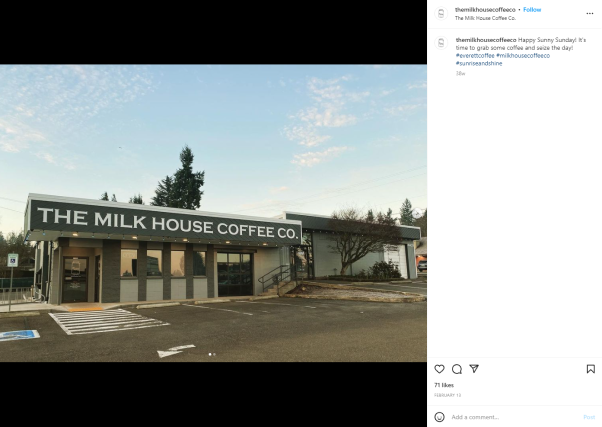 The Milk House has a creative menu full of seasonal drinks like Pumpkin Pie Chai, Ghost Pumpkin, Chaider and Sweater Weather. It is a charming spot for your morning brew. Sweater Weather -- a chai tea latte with blackberry and vanilla flavoring -- is a particular favorite. There is also a wide variety of gluten-free offerings for those with dietary restrictions.

But what do reviewers on Yelp have to say? Nellie C. from Seattle, WA describes The Milk House Coffee Co. as "a super darling coffee shop" with delicious pastries. Google reviewers love the spot just as much. Reviewer Elayna S. notes that this Everett coffee shop is dog-friendly and offers the best lattes with "house-made lavender syrup."

For the best coffee Everett locals simply cannot get enough of, we cannot forget Café Wylde. This coffee joint and restaurant serves Everett's vegan and vegetarian population. Café Wylde's claim to fame is their organic ingredients and intriguing flavor combinations. According to their website, Café Wylde sources "the highest quality adaptogenic herbs and fresh ingredients."

Fan favorites include Café Wylde's Irish Creamed Latte and Chai Tea Coconut Milk Latte -- both of which are vegan. The former boasts an elegant yet comforting flavor profile of espresso, vanilla, cacao, almond and Irish whiskey. Whether you come for breakfast or lunch, this spot also has incredibly tasty eats in store. One plant-based menu item -- pictured below -- is their peach habanero taco plate. 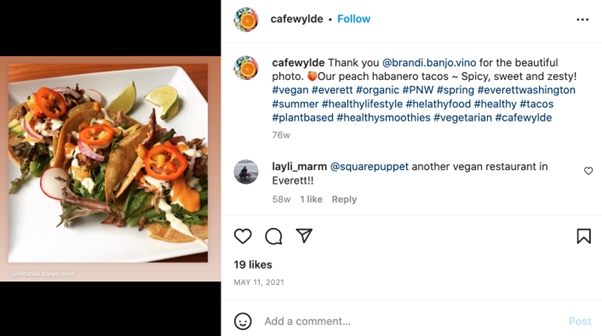 As you might imagine, patrons rave about Café Wylde -- giving the spot a 5 out of 5-star review on Tripadvisor. Reviewers on the platform describe Café Wylde as having the "best plant-based food in Snohomish" in addition to unique lattes.

Yelp reviewers have similar opinions about Café Wylde. Tyler W. from Kirkland, WA says Cafe Wylde is "an absolute gem" with "clean, healthy and nurturing food." Beverly M. from Pomona and Tanner P. from Snohomish rave about the vanilla and macha lattes. 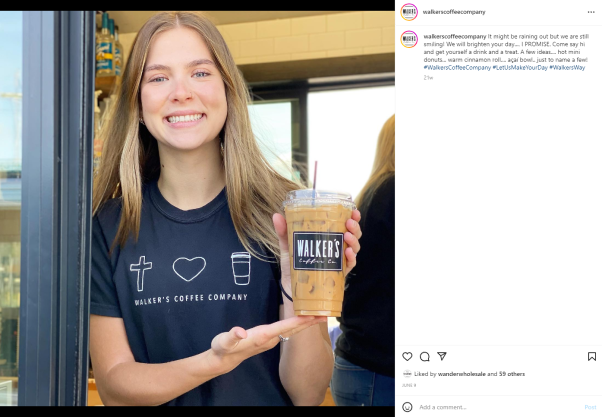 Last on our list of the best coffee shops is Walker's Coffee. While technically not in Everett, Walker's Coffee Company is the perfect drive-through stop for commuters heading into Everett from Marysville (or Arlington). Most patrons pop in for a hot cup of coffee, but their donuts and pastries are just as delicious. For the Fall and Winter, patrons can choose from cinnamon sugar, pumpkin spice and salted caramel.

Their second location in Arlington is popular amongst locals for its great service and even better beverages. Their chai tea lattes and ice-blended espresso drinks are fan favorites. Yelp reviewer Venecia R. from Shoreline, WA describes Walker's Coffee Co. as "the cutest little coffee stand...[that] looks like a tiny farmhouse."

Looking for Something to Do in Snohomish County After Grabbing a Coffee?

As a local remodeling firm, we know where all the best coffee spots are in Snohomish County. We can also recommend a few fun spots to hang out after grabbing your morning cup of coffee or late-night decaf. In our recent post, we recommend Everett's glass fusing classes, comedy nights and ceramics studios.

Tired of popping out for coffee instead of brewing a fresh cup in your newly remodeled home office or perfectly updated kitchen? Give us a call or grab a latte from one of the shops above on your way to our office in Marysville. We serve clients all over Snohomish County primarily focused in Everett, Lake Stevens, Marysville, Mukilteo, Mill Creek and Snohomish.

7 of the Best Restaurants in Snohomish County

8 Things to Do in Northwest Washington this Spring