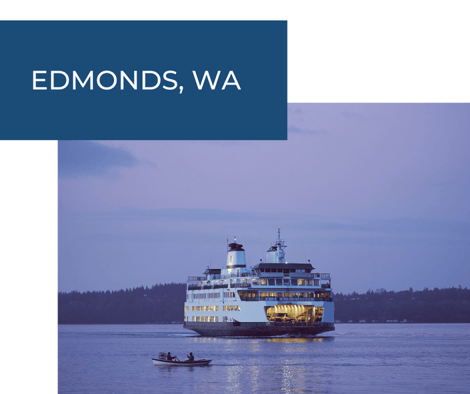 Established first as an isolated shoreline milltown, today, Edmonds, WA is an urban center for the arts. Canadian born George Brackett is generally recognized as the founder of Edmonds; he purchased 140 acres of timberland in 1876 that stretched a half-mile along the waterfront and up the hill and would later come to be known as the Edmonds "bowl". Various forms of transportation enabled Edmonds to emerge from an isolated shoreline village to the hub of a larger area.  It was most commonly reached by small ships of Puget Sound’s fabled “mosquito fleet” that linked many communities.  By the spring of 1923 that era had passed its prime, but maritime transportation endured when Edmonds acquired automobile ferry service with Kingston and occasionally other sites across Puget Sound, an activity for which the community would remain indelibly known regionally and to cross-sound passengers.  Also, the Great Northern Railway had built into Edmonds in the 1890s, providing rail links with Seattle and Everett and connections with eastern sites. As of 2019, Edmonds had a population of just over 42,000. It is located in the southwest corner of Snohomish County and sits between the Puget Sound and the Olympic Mountains to the west and Interstate 5 to the East. The city of Edmonds is also conveniently located 15 miles north of Seattle and 18 miles southwest of Everett. (Historical information provided courtesy of Historylink.org)

With the cost of selling, moving, and purchasing a new property many homeowners are turning to additions to their home to get the square footage and functionality they have always wanted. Plus, who enjoys packing up their home, moving, and then unpacking it?  Expanding the footprint of your home is one way to give your family the space they need for any situation. Learn all about the benefits, costs and value of ADUs and Home Additions on our  Home Additions Services page.

With the heart of most homes centering around the kitchen, remodeling an old kitchen improves the design appeal and makes cooking and storage so much more useful with modern amenities. The added benefit of kitchen remodels is that it provides the greatest return on your investment when you sell the home. Learn more about the proven VanderBeken remodel process here.

The design of bathrooms varies wildly from decade to decade. Often they don’t provide great storage and have old fixtures that look older than the rest of the home. You can add many creature comforts very easily when remodeling a bathroom, creating a comfortable sanctuary in the process. Learn more about the proven VanderBeken remodel process here.

We specialize in building beautiful spaces for fantastic people!

We get it, you are busy, and honestly we are too. Schedule a time for an introductory call and one of our team members will give you a call at a time that works best for your schedule. Typically the call will last 15-20 minutes. During this call we will try and answer your questions as well as gather information about your unique project, such as:

VanderBeken Remodel and all of their specialty trade partners were a pleasure to work with. They were clean, conscientious of our time, and even were great with our young boys.

Ron and Jen were committed to helping us build what we wanted. They asked great questions to set us up for success and followed up to make sure they delivered to our satisfaction. Remodels always have unexpected issues, and Ron helped us think through viable options to overcome the challenges. Ron and Jen are our go-to people for remodels. We will be calling in them again. We encourage anyone who feels strongly about getting good quality and thoughtful partnership to meet them.

The Vanderbeken team just completed a major interior remodel project for us and we could not be happier with the results. We were impressed with the integrity their team brought to the process from beginning to end. Very important to us was their follow up and attention to detail. Finally, the quality of the workmanship was outstanding.

VanderBeken Remodel met or exceeded my expectations regarding their skills, cleanliness, organization, and craftmanship. They were very professional and kept their word. It did not feel like there was a stranger in my home. They were great with my pets and respectful of my home.

I was very pleased with the work they did. Everyone involved did an amazing job and we are very happy with our kitchen!

This is the third time we have hired VanderBeken Remodel to work on our home. In every project from converting a garage into living space with woodstove installation and granite surround, to building a detached carport, to this, our latest experience, adding over 1,000 sf to our house, leveling the yard and widening our driveway, VanderBeken Remodel has excelled in everything. Ron is personable, available, and fastidious in every detail. His dedication to quality and beauty is evident in every corner of our home. For ten years we planned our “dream home” and to see it crafted out under Ron’s expertise has been an amazing experience. It’s more beautiful than we ever imagined! We always recommend VanderBeken Remodel to everyone.