By Robin Sweetser from The Old Farmer’s Almanac

NASA calls it Sick Building Syndrome. I know it as a stuffy house that needs a good airing, as my Mom put it.

By the end of January, if it weren’t for the forest of houseplants in my home, I’d open the windows, despite the snow and freezing daytime temperatures. I did open them before I learned that tropical houseplants clean indoor air of pollution. 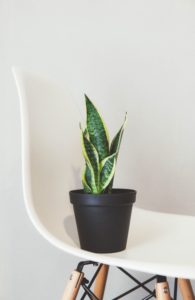 Houseplants help rid the home of toxins such as benzene, formaldehyde, carbon dioxide and trichloroethylene, all chemicals that off-gas from man-made materials used to build and insulate a home. They can cause leukemia, liver disease and a myriad of cancers. Unfortunately, no houseplant rids the air of tobacco smoke.

The NASA studies on indoor pollution done in 1989 recommends 15 to 18 plants in 6 to 8-inch- diameter containers to clean the air in an average 1,800 square foot house. That’s roughly one plant per 100 square feet of floor space.

Most of the plants that remove pollutants, scientists found, come from tropical forests where they only get light filtered through the branches of taller trees. Their leaf composition lets them photosynthesize and move air efficiently in low light conditions of the average home.

Soil and roots also remove air-borne pollution. Bacteria and fungi in soil use pollutants as a food source to feed plant roots. If you remove lower leaves on plants to expose as much soil as possible, even more toxins are absorbed to feed plants. Don’t use the picked leaves to make a salad or compost them! Dispose of the leaves safely.

Common houseplants are the most efficient, NASA found. Some of my favorites like sansevieria, Lady palm and heartleaf philodendron are on the space agency’s top plants list. My hanging basket of philodendron crawls and snakes all over the windows, to the ceiling, in the sunroom. It verges on being a weed, but a weed that does an excellent job in keeping that room fresh.

Take a look at NASA’s Top 15 Plant List below.

Add a few to your collection or buy a dozen to get started, knowing you are cleaning house sustainably. How green is that?

8 Kitchen and Bath Design Trends for 2022